Yoko Ono’s “Wish Trees for London” at the “Yoko Ono To The Light” exhibition at the Serpentine Gallery, London, june 2012. Photo by Michelebuzzi, 2012.

In the educational environment, differentiation of instruction is a vital methodology educators use in order to ensure that students are receiving an equitable education. In other words, teachers might explain something in several ways in order to account for the variance amongst learners. Students learn differently because in education, one-size doesn’t fit all. Therefore, it is essential that an educator is familiar with ways in which they can reframe or re-present a lesson, idea, process, produce, and/or learning environment that tailors to the needs of each student.

Differentiated learning is inline with Gardner’s theory of multiple intelligences, which proposes that intelligence is constructed from a series of modalities rather than one single element. While each of us has these intelligences, we all learn differently and are more proficient in certain areas than others. The areas that Gardner framed in his research include the following intellectual abilities:

For example, some students learn best if a lesson is shown to them in a visually stimulating way (of course, the arts are very helpful in this aspect), while other students understand things in a more tactile way or by listening and hearing things. Some students need more structure (mathematical/logic), while others need more choice. Everyone learns differently, so educators mustn’t teach information in a singular way. There are multiple perspectives that need to be accounted for in order to support every student’s understanding and engagement.

Artists create works of art by applying multiple intellectual abilities within their artistic process. The theory/statement which suggests that artists use the right side of their brain over the left (right brained being the creative, while left brained being more mathematical) is a myth. Art enables us to express and perceive the human experience, while utilizing the myriad of intelligences listed above. During the creation of an artwork, an artist might incorporate several different processes, materials, subjects, and themes in order to communicate with a wide-range of viewers who analyze, interpret, and value things differently.  The arts make the mundane things in life extraordinary. Gardner used an example of how writing can be transformed from a dull explanation of subjects to a work of art through the creative use of metaphors and other stylistic elements. Even the sounds of music would be banal without the creative implementation of rhythm, tone, chords, phrasing, improvisation etc. (Gardner, 1999).

An example of an artist whose work focuses on the creative differentiation of visual, naturalistic, existential, and linguistic intelligences, is René Magritte, who was a Belgian Surrealist and precursor to Postmodernism. Magritte’s work questions our perception of reality as well as how we understand and convey information. By re-presenting images and words, Magritte raised our awareness of how we think and react to the world around us. For example, in his seminal painting The Treachery of Images (1928-29), Magritte painted a pipe, traditionally used for smoking tobacco, with the phrase “Ceci n’est pas une pipe.” French for “This is not a pipe.” below. When asked whether the painting is a pipe Magritte retorted: “the famous pipe. How people reproached me for it! And yet, could you stuff my pipe? No, it’s just a representation, is it not? So if I had written on my picture ‘This is a pipe’, I’d have been lying!” Therefore, Magritte is challenging us to approach this painting through an understanding of linguistics, aesthetics, and the existential purpose of a painted object versus the actual object the painting re-presents. Without the bodily-kinesthetic ability to stuff the pipe with tobacco and smoke it, is it truly a pipe or just a painting of something that references a two-dimensional image of a pipe? One thing that can be said with a degree of certainty is that Magritte was differentiating an artistic object (a painting) from the object it represents (a pipe) by using multiple intelligences to compare and contrast the qualities of each object. For the visual and verbal learner, Magritte’s art work illustrates a visual and linguistic example of semiotics and the philosophical term mimesis. It can be a fun and rewarding activity to openly engage this work of art in both the ELA (English Language Arts) and Art classroom.

The American conceptual artist, Joseph Kosuth, presents semiotic concepts of visual, logical, tactile, and linguistic intelligences through works such as One and Three Chairs (1965). In this conceptual work of art, a photograph of a chair, a dictionary definition of a chair, and the actual chair from the photograph are all on display together. Because the photograph depicts the chair as it is actually installed in the room, this work of art changes each time it is installed in a new environment. Like Magritte’s The Treachery of Images, One and Three Chairs compels us to consider what is real and what is re-presented in. This example of differentiation is helpful for students to understand how an object can be reframed through divergent processes and materials while still carrying the same meaning (essentially). Kosuth addressed this concern in 1970 when he stated:

“I used common, functional objects – such as a chair – and to the left of the object would be a full-scale photograph of it and to the right of the object would be a photostat of a definition of the object from the dictionary. Everything you saw when you looked at the object had to be the same that you saw in the photograph, so each time the work was exhibited the new installation necessitated a new photograph. I liked that the work itself was something other than simply what you saw. By changing the location, the object, the photograph and still having it remain the same work was very interesting. It meant you could have an art work which was that idea of an art work, and its formal components weren’t important.”

Arnaud Maggs’ work embraces the visual-spatial, logical-mathematical, and interpersonal intelligences. Maggs worked primarily with photographic processes, creating sets of images, catalogued, categorized, and arranged in a mathematical grid or sequence. For example, Joseph Beuys: 100 Frontal Views, Düsseldorf, 21.10.80 and Joseph Beuys: 100 Profile Views, Düsseldorf, 21.10.80 is composed of 100 photographic portraits of the artist Joseph Beuys from the frontal view and 100 photographic portraits of Bueys’ profile. At first glance, each set of photographic portraits appear to be the same, however, Maggs actually took 200 unique photographs of Beuys as the influential German artist tried to remain in the exact same pose (you can actually see Beuys begin to slouch a bit during the final few images). These slight differences contrast the mechanical and personal elements of photography and express the interpersonal relationship between the sitter and portraitist. 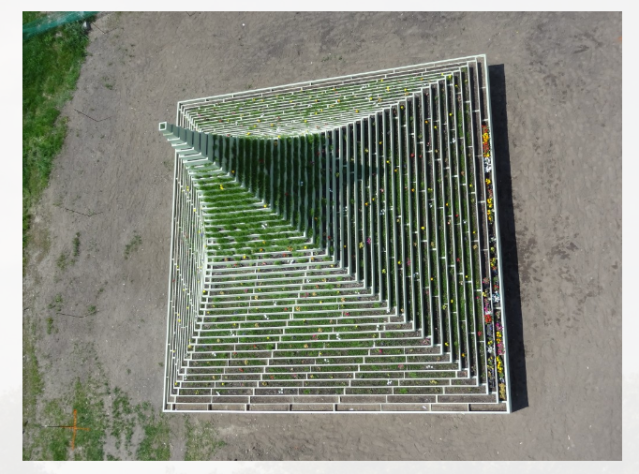 Agnes Denes is a contemporary conceptual artist who makes use of visual-spatial, logical-mathematical, and naturalistic intelligences. Denes combines mathematics, ecology, and philosophy to create awe-inspiring environmental artworks and intricate geometrical renderings. The Living Pyramid (2015) was a site specific environmental artwork created from several layers of planted grasses and flowers installed at Socrates Sculpture Park in Long Island City, Queens from May 15 through August 30, 2015. The pyramid motif is highly symbolic for Denes as an ideal mathematical form alluding to a utopian society. The realization of the project was interpersonal, involving volunteer community gardeners who planted grass and wildflower seeds throughout the thirty foot tall pyramid’s stepped surface. While the ancient pyramids of Egypt were built as tombs, The Living Pyramid, was constructed as a monument to life and the natural world.

Yoko Ono, often recreates previous works of art using different materials, processes, and participants. In her conceptual works of art, Ono provides instructions in order for the viewer to recreate or participate in the artistic process and the realization of a product. Many times these instructions are subjective and rely on the viewer’s utilization of multiple intelligences such as bodily-kinesthetic, interpersonal, intrapersonal, logical-mathematical, moral, musical-rhythmic, verbal-linguistic, and visual-spatial abilities. In some instances, Ono’s work lives on only in its documentation (photos, video, sketches, reviews, etc. from when it was performed or installed) or written instructions. Therefore, many of her works of art are meant to be revisited, analyzed, and interpreted by a variety of individuals, which ensures that each display and engagement of the art work is different from its prior presentation. For example, her Wish Tree (c. 1981-present) installation, where a native tree is planted and ornamented with wishes, has been re-presented in various locations and by a wide variety of participants. Ono’s work celebrates each viewer’s intellectual, social, and emotional experiences through its democratic and differentiated processes. Below are several examples of how Ono’s Wish Tree has been re-presented using a variety of concepts, materials, processes, and environments.

Ono’s project inspired Sanctuary, a recent (2017) collaboration between Art Education Graduate students at Brooklyn College and High School students from Flatbush, Brooklyn, in order to provide catharsis and positivity in light of the ominous social and cultural environment threatening the safety and dreams of many Americans. After group discussions (and viewing several of Ono’s Wish Trees), students created tags featuring positive wishes, images, or quotes that related to the theme of sanctuary as they interpreted it. The student’s affixed their tags to trees on Brooklyn College’s campus. During a one day event called RESPOND BC (April 26th, 2017), the High School students solicited the participation of the Brooklyn College community to create and hang tags on the trees. Students became educators by explaining the theme and process in an open ended manner to each participant they engaged with.

Because art requires the creativity of the maker and the participation of the viewer, it is a perfect discipline for the multiple intelligences to coincide. Furthermore, since art can be expressed and interpreted widely, it enables a wide range of differentiation. One activity that embraces this methodology is having students re-present a prior project using another medium (ex. making a sculpture of a drawing, or writing a song about a painting). By revisiting a concept they’ve addressed in one medium and thinking about it in different medium or material, students are developing additional multiple intelligences required for symbolic expression in that material/medium.

* these two multiple intelligences (Existential and moral) were added by Gardner after his initial research.

Gardner, Howard. (1999). The Happy Meeting of Multiple Intelligences and the Arts. The Harvard Educational Review, 15(6). http://hepg.org/hel-home/issues/15_6/helarticle/the-happy-meeting-of-multiple-intelligences-and-th