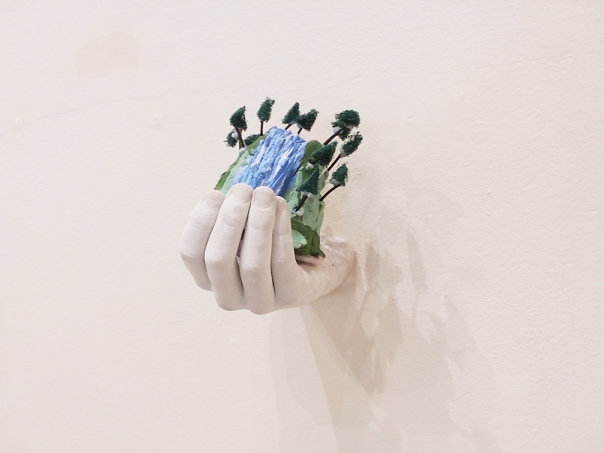 Ido’s hand. “My mom is an artist…we made objects we want to protect…I made a waterfall because in my generation I don’t think there will be anymore.” Photo courtesy of Melanie Daniel.

The enduring understanding among scientists is that climate change is happening all around us at an accelerated pace. Recently published climate reports from around the globe have provided the details of the effects humans have had on the Earth, and the dire consequences that are likely to occur if we don’t take action collectively.

Human-centered impact on the environment isn’t a novel theory or occurrence. Examples of ethical awareness for maintaining the world around us come from a diverse array of ancient, modern and contemporary sources, which include both historical and mythological accounts. One of these more illustrious examples is the biblical narrative of Noah’s Ark, which is a cautionary tale of how humans corrupted the once pristine landscape by disrespecting its natural resources, as well as one another. While the tale of Noah’s Ark is one of fiction, the idea that our actions have consequences on the world around us is blatantly evident. Throughout the human timeline, species and civilizations have come and gone due to human behaviors such as over hunting, warfare, industrialization and pollution.

Today’s generations face a serious quandary in light of the global crisis of environmental decline. We have witnessed the decline of 60% of the worlds wildlife population between 1970 and 2014 (see: WWF, 2018). The causes for such catastrophic events largely include the abuse of wildlife and natural resources for human profit or personal gain (i.e. trophy hunting, factory farming, deforestation of unique ecosystems).

In the educational sphere, some liberal arts and science curricula have evolved to include a strong ecological focus and there is overwhelming support among Americans for teaching students about climate change, although it is still a contentious issue (see: Cheskis, Marlon, Wang and Leiserowitz, 2018). The arts and natural sciences are essential disciplines where students and educators can engage in experiential learning and develop a sense of understanding about themselves and the world around them. In the process, they can explore the effects that scientific and artistic reflection and production have within our culture. Through making insightful connections to their cultural and ecological environment, they may realize the moral role they can take on as makers and become more self sufficient and cooperative in the production and sharing of resources (instead of being largely reliant on consumer goods). Hopefully they will make connections regarding their role as consumers and producers and become more aware about making ethical decisions that support the maintenance and preservation of the environment. The essential question that gets addressed through learning processes and activities is: “how can we coexist with the natural world and become effective in informing others about the need to maintain a clean and ethical relationship with the environment?” Some follow up and alternative fundamental queries include:

A recent collaboration between multidisciplinary visual artist Melanie Daniel and a group of 4th graders at an environmental science school, presents compelling responses to these prompts. Daniel’s own artistic practice focuses on climate related issues and she currently holds a three year long position as the Padnos Distinguished Visiting Artist at the Grand Valley State University (GVSU) in Grand Rapids, Michigan. The residency is an endowed chair and gives Daniel a framework to do art-centered socially engaged projects with the greater community.

The process for Daniel’s collaborative project with 4th graders began with each student constructing plaster hands using an alginate mold (a type of slime that hardens and can be filled with plaster or other material). The molds captured the precise details of each student’s hand, which resulted in a highly personalized sculpture. Later in the year, the students sculpted clay objects that represented a living entity in the world they wanted to protect (i.e. flora, fauna, geological formations, insects, etc.). The object that the students created sit in the palm of the hand, as if the molds of the students hands are nurturing and safeguarding the object. The hands are currently installed in the gallery at the Alexander Calder Art Center‘s Pandos Gallery at GVSU, where they are aligned in a row, providing a symbolic wall of hope. The exhibition is titled Offering.

Save the tulips. Photo courtesy of Melanie Daniel 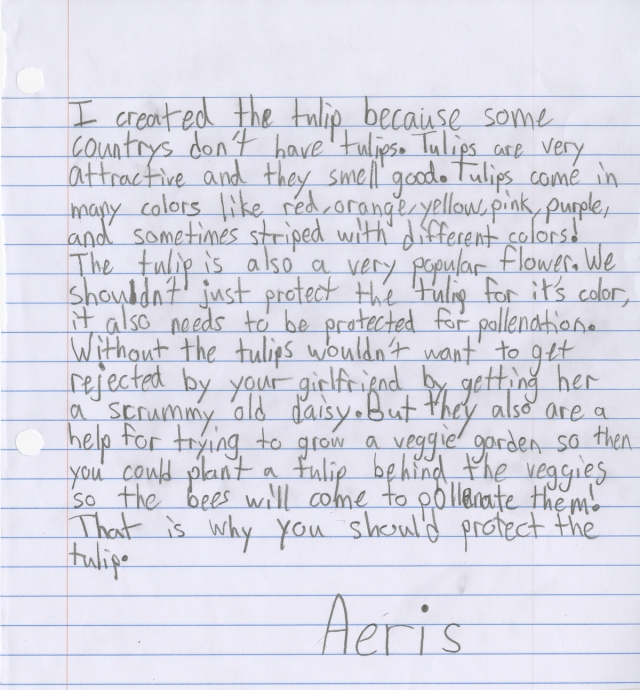 Save the tulips. Photo courtesy of Melanie Daniel

Daniel and the students also compiled an accompanying catalogue consisting of drawings of their chosen objects and a short paragraph of why they chose that object and the significance it has to them. The students’ drawings and written responses are highly effective and while many have a humorous tone, the overarching theme is one of loss, when recognizing that perhaps some or all of these entities will no longer exist in the future. According to Daniel, the students asked poignant questions while they were working such as: “how will (future) kids know what a snake really looks like when it moves if it is extinct?”

The project has been beneficial for both the students, as well as Daniel herself. Through thinking about current issues, communicating unique ideas and making art, they developed a sense of stewardship for their surroundings. The installation reflects how the students exhibited empathy and made serious connections between their generation’s actions and the natural world. Additionally, they posited some suggestions for maintaining and repairing the world around them. Regarding the experience of working with young creative individuals, Daniel remarks: “Although I teach undergrads, it’s the little kids that blow my mind. They’re less self conscious, more engaged and deeply curious. They also have much better attention spans than their older cohorts and can apply themselves to a new task and utterly lose themselves to it.”

A reason that science and art work well as co-relational subjects in the curriculum, is that both disciplines start with imagination and employ exploration, discoveries and insights through an empirical lens and process. Essential habits of mind that are learned through science and art are: theory testing (hypothesis, inquiry, exploration of materials), flexible purposing (exploring new avenues as research/exploration leads to discoveries) and judgements in the absence of rule (both disciplines seek to break new ground in terms of how we analyze and contextualize natural phenomena).

When visual artists team up with young creative and inquiring minds, the possibilities for innovative results are enormous (as seen in the aforementioned project). One of the ways we can help our natural environment is to focus on individual and communal production methods that cut down on waste and mass consumption. Art can teach us to be sustainable (see: Kallis, 2014) and to create something unique from raw and found materials. Art also challenges us to dream big and produce ethically for the world we would like to see and experience.